I don’t really understand how crossing Midsommer Common on a bike used to feel as though it took half an hour, when in fact, it takes less than five minutes, now.

And that’s not the only thing that’s changed. My travel triangle was very small before, I must admit, but why on earth hadn’t I discovered the river before now? I don’t mean that bit by the Backs, of course, the part that we all know from postcards, which from May onward is either home to punts full of revelling students or excited tourists with selfi-sticks. I mean the part from Jesus Green to Fen Ditton and beyond.

The river is lined with houseboats and swans, water lilies and rowboats. Cattle grazes on Stourbridge Common and an odd assortment of horses feeding in paddocks on Ditton Field, while joggers and bicycles, dogs and their owners enjoy the sun glancing off the clear, tranquil Cam. It’s hard not to admire the array of flowers and colours decorating the houseboats, which cling with idyllic tenacity to the banks and to wish all summers could be like this. 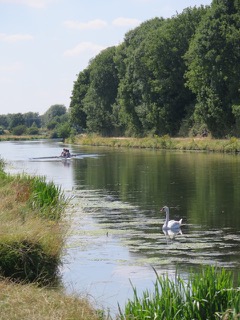 And in the 30 degree heat, it is difficult to imagine the bustle of the city less than five minutes cycle ride away. I can’t help but to wonder how the seasons will change the riverbank as I walk beside it in the months to come – if the houseboats will, like swallows, disappear at the end of the summer to warmer climes.

Yet, for now, in this endless heat, where there is no rain, where the air is dry and warm from the moment I wake up to the moment I go to sleep, this does indeed feel like paradise. There are echoes of Toad, Ratty and Mole, of Three Men in a Boat, of days spent with picnics on the river bank, or sitting in a row boat with fingers trailing lazily in the water which cast ripples to the sound of oars gently patting the water

And to top it all, The Green Dragon Pub and The Ancient Shepherd’s, sit at either end of the river, like a pair of parenthesis, tempting the thirsty traveller in. 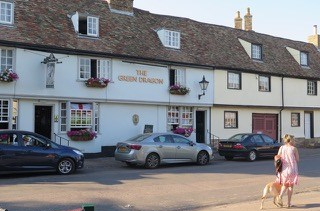